Creating your own narrative — not allowing society’s expectations to limit achievement — is the advice Indiana State University students received Monday from an expert in African-American studies.

“You have to be responsible for re-narrating who black people are,” said Professor Valerie Grim of Indiana University during the Black History Month Kickoff event at Hulman Memorial Student Union.

“We can’t do it all in the gym, or on the football field, or through the arts or dance,” Grim said. “You have to do the deep work, the intellectual work.”

Reading and being interested in great literature are key to self-improvement, she said.

She cautioned against accepting the narratives that have already been written to “exceptionalize” achievements by African-American leaders of the past. It’s the rare person who can lead a movement and become a monument.

But people can change the narrative written centuries ago by white Europeans and Americans trying to justify the enslavement of Africans, Grim said. That narrative portrayed Africans as deficient in intelligence, and created indifference toward the plight of slaves and their descendants.

It can be difficult to change the narrative, Grim warned, because it’s been used to justify how people are treated. Even science has been used to try to support some abilities associated with skin color.

“People will give you your achievements, but they don’t want you to change who you are,” she said.

The American experience has changed over time for African-Americans, she said, but it hasn’t changed enough so that skill color does not matter. She likened some of the changes as receiving crumbs of bread while the rest of the loaf stays with those in leadership.

Grim encouraged the students to ask themselves, “So what? Now what? What can I do?” as they think about their future.

Reconstructing the narrative for African-Americans also means sharing personal stories and successes in communities, she said.

“There’s nothing more powerful in the world than a story, and we have to change how black history is told in America,” Grim said.

Students attending the midday event said they were impressed with and encouraged by Grim’s message.

“People have assumptions, and today’s students have to show they are more than those assumptions,” said junior Antonio Cornelius.

Professor Crystal Reynolds said ISU has a history of being progressive about education for African-Americans.

Next year, ISU will be celebrating 150 years of African American achievement, Reynolds said, and the community can be proud of that history.

To highlight “Hidden Black History” at ISU, Reynolds will lead a tour starting at Cunningham Memorial Library on Feb. 21.

Other Black History Month events at ISU include a Regional Soul Cuisine event on Thursday, and a gospel celebration concert on Feb. 23 at Tilson Auditorium.

A list of events is available through the Charles E. Brown African American Cultural Center at www.indstate.edu. 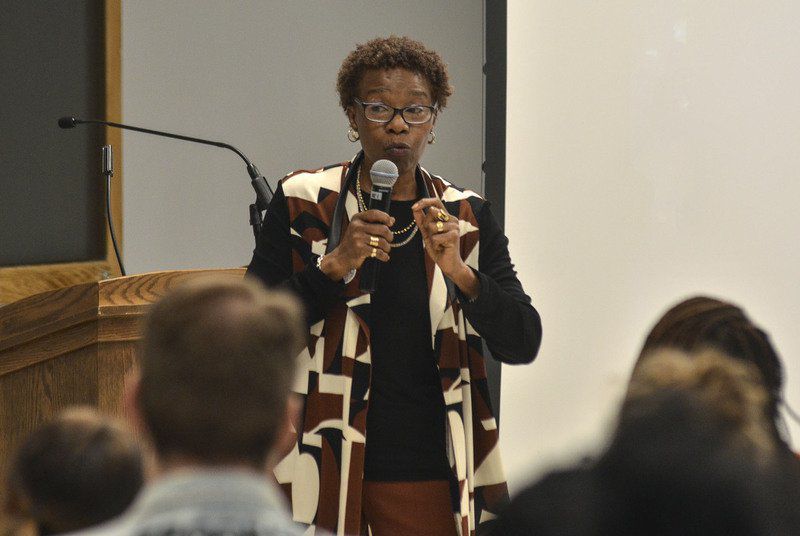