The choices of which five federal death row inmates will be executed first at the U.S. Penitentiary in Terre Haute came as no surprise to Wabash Valley residents who have closely followed capital punishment in the United States.

Mark S. Hamm, professor of criminology at Indiana State University whose expertise includes public policy, said the timing of the government’s announcement and its choices of which death row inmates to execute were deliberate.

It’s most palatable to reintroduce the executions for those who’ve caused the greatest moral panic,” said Hamm.

“It’s palatable and will go down well” with the public, Hamm told the Tribune-Star on Thursday afternoon. “It’s devious, but it’s logical.”

Execution dates of Dec. 9, 11, 13, and Jan. 13 and 15 have been set for the five inmates – all of whom are housed in a Special Confinement Unit. That same unit contains the execution chamber.

Sister Barbara Battista of the Sisters of Providence called the resumption of executions horrifying and distressing, and she vowed to protest.

“I can guarantee we will be out here at the prison, and it won’t be just us,” Battista said.

“It’s very distressing for such a total disregard of human life,” said Battista, who was recently arrested in Washington, D.C., during a protest against the treatment of immigrant children at the United State’s southern border.

Hamm said the announcement’s coming the morning after former special counsel Robert Mueller testified before Congress is likely not a coincidence.

“When major politicians are faced with Conflict A, they create Conflict B, and then over time go to Conflict C to take attention away from Conflict A,” Hamm said, calling Trump a “master” at refocusing attention.

Hamm was among the crowd who waited outside the federal correctional complex in Terre Haute in 2001 on the day Oklahoma City bomber Timothy McVeigh was executed.

Hamm said he thinks there will be protesters present should the newly scheduled executions go forward, but he said protests likely will not be as high-profile as those at the McVeigh execution.

In 1972, the federal death penalty was set aside as unconstitutional in light of the Supreme Court’s 5-4 decision in Furman v. Georgia.

The federal death penalty was reinstated in 1988, and then only for a narrow class of offenses, according to the Death Penalty Information Center. The Federal Death Penalty Act of 1994 greatly expanded the number of eligible offenses.

Three federal executions have been carried out since the U.S. Supreme Court reaffirmed its acceptance of the use of the death penalty. The inmates executed were McVeigh on June 11, 2001; Juan Raul Garza on June 19, 2001; and Louis Jones Jr. on March 18, 2003. All were executed at Terre Haute, which houses the only Bureau of Prisons federal execution chamber still in use.

There are currently 61 people currently on federal death row, according to Death Row USA, a quarterly report of the NAACP Legal Defense and Educational Fund last issued in April. (Other sources put the number at 62, but that count includes one person who faces a potential capital re-sentencing and one person whose death sentence reversal is still subject to possible appeal.)

Sixty of the current prisoners are men; one is a woman. Almost all of those prisoners are held in Terre Haute. However, the lone woman -- Lisa Montgomery -- is held in Bureau of Prison’s Federal Medical Center in Fort Worth, Texas.

A small number of federally condemned male prisoners are held or have been held in United States Penitentiary Administrative Maximum facility in Florence, Colorado -- where Boston bomber Dzhokhar Tsarnaev is now held -- and at the U.S. Medical Center for Federal Prisoners, in Springfield, Missouri.

Each federal death penalty case is authorized by the Department of Justice in Washington, D.C,, in consultation with local U.S. attorney offices, which prosecute the cases.

While the court issues the death penalty, the director of the Bureau of Prisons sets the dates of execution. 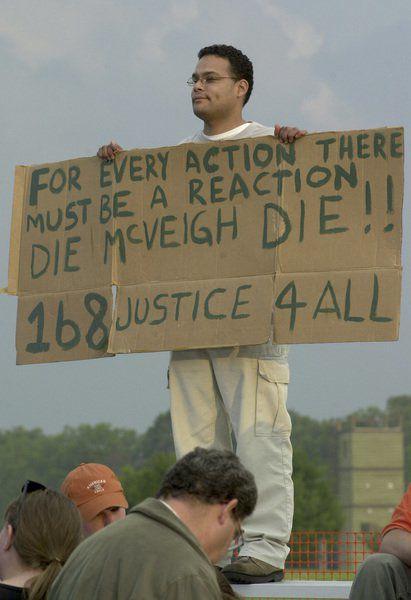